El Cerrito, located in San Diego, California, a place some people have illustrated as a jewel or hidden gem of a neighborhood, is still somewhat undiscovered. El Cerrito translates to “The Little Hill.” Homeowners definitely are spoiled because this little hill often has some spectacular views of Downtown San Diego and even glimpses of the ocean, Coronado Islands, and the bridge from some properties. Such views instantly taking your breath away, if even for only a moment, both surprising newcomers and delighting residents, when the sun sets against such magnificent backdrops.

Once, mostly lush orchards of lemon and orange trees grew here with little development. Then, this neighborhood saw significant progress during the beginning of the 1920’s. This was due in part to the Old Cajon Road becoming US Highway 80 also known as “El Cajon Boulevard.” Homes now span north and south of El Cajon Boulevard in El Cerrito. In this neighborhood you will find it to be mostly residential suburban homes. Down its border streets, is where most of the business activity exists.

El Cerrito has quite a few ethnic restaurants, bistros, and eateries, walkable roads, eclectic shops, good bike lanes, and relatively inexpensive and even historic homes. Many of these beautiful homes sit on very large lots. These larger lots give way for nice separating space in-between the homes. You will find a mix of architecture here everything from Spanish Colonial to Mediterranean Revival to Modern, and California Ranch, to name a few. This neighborhood would definitely not be dubbed as having cookie cutter homes.

The locals think of El Cerrito as a populace on the verge. Being just to the west of San Diego State University, this neighborhood sees an influx of trendy young people living along side many established families. And with annual events like block parties and happy hours organized and hosted monthly at neighbors homes, these people and their togetherness, shape this dynamic neighborhood into a truly remarkable and cohesive community.

If you would like to learn more about buying a home, on the little hill, in El Cerrito, please call today!

Here is an opportunity to own a move-in ready 2 Bedroom 2 Bath condo unit in the coveted College Area. This unit features generous size bedrooms on opposite ends of the u...

Unique opportunity to own a 2 bedroom 2 bath property near San Diego State University with NO HOA & NO HOA DUES!! No unit to your right or left, just one unit above you ... 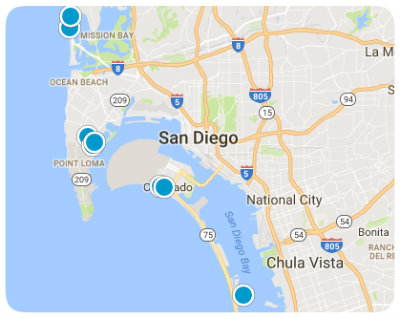